My Response to Gordie Johnson's, "Turn That Amp Up!" Article 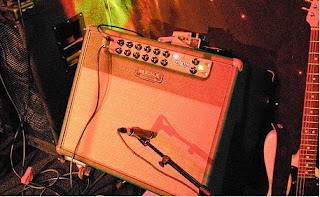 Gordie Johnson says, "Turn That Amp Up" to guitarists when playing live...

Working as a sound tech in the bar/clubs, I know that guitar amps for the most part of usually louder that the other instrument amps in a typical band. The biggest issue happens when the guitarist has his amp facing the audience and all you can seem to hear is the guitar amp and not much else. Combo amps are problematic when the guitar places the amp on the floor behind himself and all the amp sound is blasting the back of his knees! That is when the guitarist turns it up because, he can't hear his amp!

I know that most tube guitar amps sound much better when they are turned up. As a sound tech, I usually make a suggestion to change the location of the amp from behind the guitarist to beside him. That way the guitarist can still keep the amp turned up while also providing a side fill wash of guitar to his band mates. That way, I can add the mic sound to FOH mix to blend with the rest of the band.

If the guitarist has a 1/2 stack amp then, I suggest that you turn the amp sideways towards your band mates on stage. Trust me, they will be able to hear you and so will you.

If the guitarist has a combo amp then, I suggest that he get that amp off the floor from behind him and put it up on something to allow them to hear their amp better. An empty road case works fine as does an amp stand that can be purchased at your local music shop. A wonderful creation for guitarists!

When I mix shows at the local live club in my town, I have had the owner come up to me and ask for the mix levels to be turned down. That is when I show him that even when I mute the guitar mic channel on the mixer, the guitar amp is still really loud. It is his club and he has to appease his patrons so I usually find a way to fix the mix.

So, Mr. Gordie Johnson, I do agree that guitarists should "turn that amp up" but, I also know that sometimes less really is more.