Personally, I still like to use analog mixing consoles for my gigs. I messed around with a digital console and I didn't really get into it that well. That doesn't mean I will never use a digital console. I think what I need to do is to try out some different boards from different manufacturers to see which one fits!

With the pro sound companies using digital consoles on major tours, many of the older, analog consoles are up for sale on the net. For example, I just saw an ad for an older Soundcraft Vienna II 40 x 8 mixing console. Asking price is $4500.00. Original purchase price was $55,000.00!!! That is a real steal of a deal for a console that will probably outlast many of the newer digital boards.

A fellow sound tech friend of mine bought a digital mixer and he likes it because, it has everything built right in. No need to bring the FOH rack out anymore. Also makes for a quicker load-in/setup/teardown during the show.

Okay, fellow sound technicians. I invite you all to voice your opinions on this subject. I am curious to get the low down. 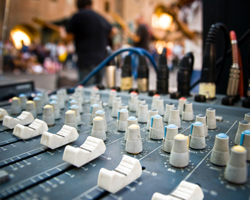 Posted by Ron Behro at 2:27 AM No comments: Links to this post

Here is a video of Matt Blackett - Associate Editor of Guitar Player Magazine with special guest Patrick Quilter doing a demo of the new Quilter MicroPro200 guitar amplifier. Check out the video for all the features of this excellent unit. Enjoy!

Posted by Ron Behro at 1:43 AM No comments: Links to this post 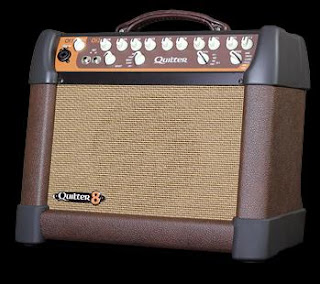 You are looking at the new Quilter MicroPro 200 Guitar Amplifier new on the market this year 2012.

Last night, I was mixing sound for a band called "Borderline" and both of the guitarists in the band purchased on of these little powerhouse guitar amps! This little amp only has an 8" speaker inside but, has an amazing 200 watts of power output available! The amp is of a solid state design but, has all those great sounds of a tube style guitar amp. Right now this amp is only available for sale online on the Quilter Labs website at http://www.quilterlabs.com/

I was able to achieve a great sounding mix of both guitarists in the band using the Quilter amps to compliment their specific styles. By using the XLR direct outputs on the back of each amp, there were no microphones required to get the guitar sound to the mixing console. It made job as sound tech much easier for the gig. This amp is a big sounding unit in a small package. The amp has a weight of 19 lbs. which makes it easy to transport it from gig to gig without any effort.

Go to the company website and find the page with the sound clips on it to listen to this excellent guitar amp!

Borderline - Live At The Dow People Place, Sarnia, ON. 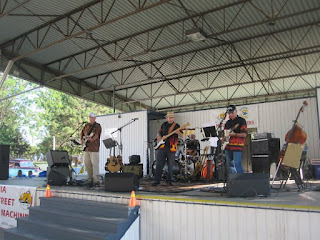 Last night, Thursday, June 7th,  I was mixing sound for the band "Borderline" at the Dow People Place - Centennial Park - Sarnia, ON. It was great summer weather and a big crowd came out for the music. After a minor technical issue was solved, the show went on. Two quick songs for a soundcheck and we were off and running!

Looking forward to the next Borderline gig at the DPP on Thursday, July 5th at 7:30pm. For all of you Sarnia/Lambton folks, why not come on down to the DPP for an evening of great music with Borderline.
Admission only costs a Loonie to get it the gates. Hope to see you there next month.

Cheers!
Ron
Posted by Ron Behro at 12:22 AM No comments: Links to this post