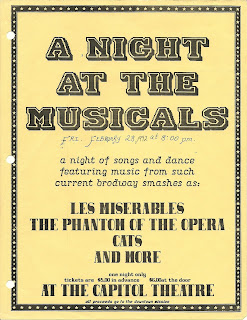 Today is the 25th Anniversary of my first solo sound and lighting technician gig at the Capitol Theatre in Windsor, Ontario. The date was February 28, 1992.

My good friend Suu Taylor (Marwood) was instrumental in creating and putting together a production of songs and dance from some pretty famous broadway musical productions. My friend Suu wrote me a letter and asked me if I wanted to take on the challenge of being the Head Sound and Lighting Technician for the show. I wrote back and gladly accepted (the days before we had email).

One day before the show day, I drove down to Windsor, ON. to meet up with my friend Suu to get all the sound and lighting gear together for the show at the old Capitol Theatre - the black box theatre. All the gear was provided by Vincent Massey High School drama dept and I had to sign off on it before they would let me take it. The drama teacher was a bit reluctant to let me take the gear at first but, Suu convinced him that I was trustworthy enough and responsible enough to do so.

We loaded into the theatre and did the full tech setup for the show. The bulk of lighting fixtures were hung overhead above the stage on a 40ft lighting pipe that could be raised and lowered using a hand crank pulley system. The house technician, Peter helped me access the lighting truss by lowering it down to stage height so that I could hang the lights, gel, circuit and focus. Then the truss was on it's way back up. Or at least I thought.

A few minutes later I am back at my perch which was an upstairs hallways with only window access to view the stage. I was watching the lighting truss coming back up into position and disaster struck! The entire lighting pipe came crashing down onstage in one big mess!!! The falling truss nearly missed a few of the actors as they were leaving the stage and came within an inch or two of destroying an instrument amplifier at the side of the stage where the orchestra was setup.

We were all in shock after seeing the truss fall to the stage leaving a mess of broken glass and slighting twisted fresnels! Turns out that the main cable from the pulley was connected to a large plate with 5 other cables spread out across the length of the pipe. That plate is where the connection broke and let go!

We all came running down to the stage to make sure that nobody got hurt and to take a look at the damage. This happened 4 hours before show time!!!

So, Peter called some of the other house techs to come in help fix the problem. We stripped everything that was still connected to the truss. Light fixtures and cabling all had to be removed. Next, the house techs came in with pipe wrenches to dismantle all the sections of pipe that made up the single truss. Finally, cleaning up all the broken glass from the light bulbs from the strip light fixtures.

Now there is only 3 hour left until show time and we came up with a plan to use all the working fresnels and mount them to two t-bar lighting stands and place them on each side at the back wall of the stage to achieve the back lighting effects that I required for the show. The setup was going to work well!

Just about then I saw my friend Suu and she asked me if the show could still go on and of course, I said yes! I gave her a big hug and told her not to worry and she went on her dinner break with the rest of the cast. I stayed around to make sure my lighting was going to work well with all the scenes. I was using a Strand Mantrix 24 channel, 2 scene preset manual lighting console with programmable submasters. When I got the console to check lighting I then realized that all my programmed submasters were ALL WRONG!!!!
So, I wiped them all clean and proceeded to program some new submasters to work with scenes. The rest of the show I was now going to do manually with no presets!

Even with the lighting truss disaster, we did manage to open the doors on time for the show and I figured out a way to improvise much of the lighting during the show in real time with no presets!!! The show did go on and we got a great applause after it was all over!

Afterwards in the lobby, I had some of the theatre patrons tell me how great the lighting for the show really was. I tried not to laugh about it and just accepted the compliments. Little did anyone know the craziness that had happened only hours before!
Posted by Ron Behro at 9:13 PM 1 comment: Links to this post