Recently, I found this awesome version of the song "Can't Find My Way Home" performed by Steve Winwood, Eric Clatpton and band. Such a classic song and with such a great sound! When I found this on YouTube, I watched the video multiple times because, I just love the groove of this version. They just don't write songs like this anymore! Enjoy!

Posted by Ron Behro at 11:24 AM No comments: Links to this post

Party In the Point - Featuring "Borderline"

Here is video of Borderline performing "Green River by CCR" at Party In the Point. Not a very big stage to play on however, the band made due. I mixed the sound for the gig but, you can't see me as I am off on the right side of the stage. Yes, it really was hot under that tent! We had a small but appreciative crowd hanging out to listen to the music. Enjoy!

Posted by Ron Behro at 11:12 AM No comments: Links to this post

Here is a video taken from The Carvin Channel which details the new Carvin C3248 mixing console. The engineer explains how the board works in a live concert setting.

Posted by Ron Behro at 10:32 AM No comments: Links to this post

Recently, I took my daughters out to the Clearwater Arena in Sarnia for an open skating day. While watching the girls from the seats, I noticed a single speaker hanging down from the centre support of the arena ceiling. The speaker had multiple drivers on all sides of the cabinet. It was the OctaSound speaker by K.D.M. It is a unique design for a loudspeaker system and somewhat common in smaller arenas. They had music playing back over the speaker during the skating time and it sounded okay. Definitely, only for music playback and maybe one announcer's microphone. It would be inadequate to use it for full-blown concert sounds. With all of the new speaker technologies available, I wonder why they have not upgraded to a better audio system. Here is a picture I took of the speaker in the arena. 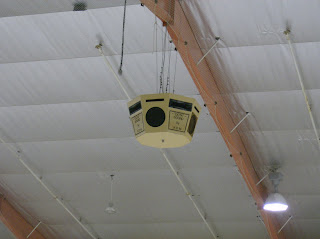 Posted by Ron Behro at 9:54 AM No comments: Links to this post

A Great Mix? Sometimes It Depends On Who You Ask… 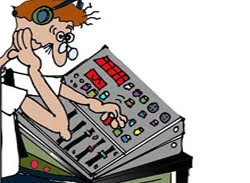 Here is an article written by Dave Rat. This one brings us back to the "less is more" scenario when doing a live sound mix. Dave talks about how you should not go overboard with all the frills of a sound mix until you get a basic sound mix dialed into the mixer. Makes sense to me. Click on the link below to read the article from the ProSoundWeb site. Enjoy!

Posted by Ron Behro at 9:46 AM No comments: Links to this post

A Lot Of Hats: The Job Is About Much More Than Sound 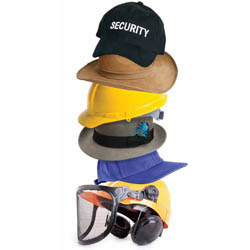 Today I found an article on the ProSoundWeb page about how many different jobs we do for live sound productions. We wear many hats in our jobs so as to create the best possible shows. This article describes the various jobs and duties we fulfill to solve all the clients needs. Click on the link below to read the article. Cheers!
http://www.prosoundweb.com/article/a_lot_of_hats_the_job_is_about_much_more_than_sound/live

Posted by Ron Behro at 9:30 AM No comments: Links to this post

Over the years I have been following the work of Mr. Doug McClement - owner/operator of Livewire Remote Recorders based out of Toronto, ON. A number of years ago, Doug had a new remote truck built out of a small transport truck. This production truck has the best of everything inside for professional live recording and broadcast work. Recently, I revisited the website and found link that allows a 360 degree tour of the complete inside of the truck. It is so awesome! I am including the link here so that all of my sound tech friends can have a chance to take the virtual tour. Enjoy!
http://cpaisley.com/examples/panorama/livewire_final.html 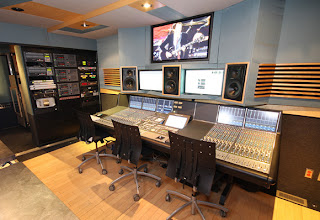 Here is a link that shows the floor plan of the truck. Click on link below first, scroll down to bottom of picture and select the [Click "here" for Mobile Floor Plan in PDF Format] and document will download to view.

http://www.livewireremote.com/frames.asp?l1=thetruck
Posted by Ron Behro at 2:18 AM No comments: Links to this post

So, here we are revisiting a video of my friend Richard Scarsbrook playing drums with his band "Disorderly Conduct". The song is medley of "White Room/Crossroads" by Cream. They played at the famous "Jeff Healey's Roadhouse" in Toronto, Ontario.
This video was recorded very well and the live sound is awesome! Kudos to the sound tech that night!
Take a look at the video for an awesome performance those classic songs!
Enjoy everyone.

Posted by Ron Behro at 1:36 AM No comments: Links to this post

Richard Scarsbrook and the Featherless Bipeds

Here is a video of my good friend Richard Scarsbrook and his band The Featherless Bipeds performing an original song called "Tempting". Richard has been out in front of the vocal mic for awhile now considering that he is one of the best drummers that I have ever played with! He is a multi-talented guy! Rich is a drummer, singer, songwriter, published author, actor, and school teacher.


When I first met Richard about 15 years ago, he had written the lyrics to this particular song with his old band called "The Know". The original version of the song sounded different than this latest version. The new version is really great! I just wish I could watch Richard banging on the drums for this one. It would be awesome to see!


Take a minute to check out this video

Posted by Ron Behro at 1:14 AM No comments: Links to this post

Dancing On A Wing - The Works

Back in '89, I was attending Humber College for Technical Theatre Arts and I became a fan of a great Canadian band called "The Works". I just happened to live next door to the lead singer of the band, Brian Malone. Brian told me about his band and gave me a cassette tape of the band's album called "From Out Of Nowhere" circa 1989. Soon after the album was released, I started seeing the videos on MuchMusic all the time. I even attended one of the band's shows in Toronto with some tickets that Brian gave to me. I tried to give away the tickets to my college classmates but, nobody wanted one! They all said "The Works, who?" because, they had never heard of the band before. I went solo to the show and the band rocked the place!!! Next day, I went out and bought the album on CD and to this day I always listen it. It is on my iPod always! Of course, I always wanted to see the video again for "Dancing On A Wing" but, for ages nobody had ever posted it on YouTube. Not until this year. Back in February 2011, "Dancing On A Wing" finally made its YouTube debut thanks to Mr. Brian Malone himself. Brian posted it on his own YouTube page from an old video cassette recording. When you play the video the start is a little rough but, once it gets going, it is a pretty good play. Brian Malone, thanks for posting the video on your page for all of us to enjoy. Here is "Dancing On A Wing" by The Works.


Posted by Ron Behro at 12:01 AM No comments: Links to this post

Labels: 1989, Canadian band, Dancing On A Wing, From Out Of Nowhere, The Works 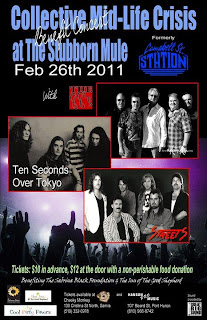 Coming up on Feb. 26th, 2011 will be the "Campbell Street Station Reunion". It is being held at The Stubborn Mule bar (formerly the Campbell Street Station). Tickets were sold out very quickly so don't even think about getting any now. The Reunion show is to feature local bands from Sarnia who used to play at "The Station" back in the 90's. The bands are:
Ten Seconds Over Tokyo
Streets
The 88's
Lucky me, will be in attendance as I will be working the lighting for the shows while Steve Loxton of Great Big Sound handles the live sound mixes. It is a capacity crowd that night and sure to be a fun time for all in attendance. I am taking my camera to document the event that night. I will be sure to post some candid shots on my page.

Cheers!
Ron
Posted by Ron Behro at 11:25 PM No comments: Links to this post

A new guitar amplifier has been on my wish list of items for a very long time and I have found the one I would like to buy. Marshall Amps came out with the Class 5 combo, tube, guitar amp which is the perfect fit for my guitar setup. I am looking for an amp that I can use to practice with in the basement and also use in a jam setup with my other musician friends. The Marshall Class 5 will work for me with it's small size, low wattage power, and reasonable price point. I just found out that it is now available in two colour finishes: standard black, and green. See attached picture below. 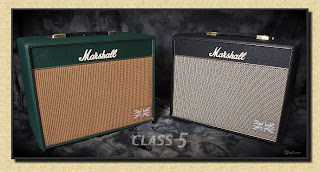 On the Marshall website site there is the Marshall Class 5 product launch with featured guitarist, Joe Bonomassa. Joe puts the amp through its paces and it sound great! Here is the web link:
http://www.youtube.com/watch?v=PrhF4Vrd-OM
Also on the Marshall website is an archived product review taken from "Guitarist" magazine from the UK, written by Mick Taylor for the Marshall Class 5 amp. Check out the review by clicking the link below. It is a PDF file so be patient while it loads up. Enjoy!
http://www.marshallamps.com/downloads/files/c5%20review.pdf
Rock On!

Posted by Ron Behro at 11:05 AM No comments: Links to this post