My Most Recent Sound Gig Worked 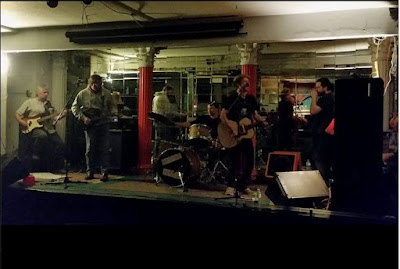 Okay, here is a picture of Sarnia, ON. band called "Marinol Nation" playing live at Trinity Lounge and Temple Bar. I was at the helm mixing the show in this really unique venue. What you are looking at is the remnants an old strip club that used to be called Cheri Champagne's. Notice all the mirrors on the full wall behind the band. Acoustically, this makes for some challenges mixing loud music in the space.

My mix location was behind the stage left speaker shown on the right side of the picture. I had to walk out to the front of stage to listen to my mix and then back to make adjustments. The sound system consisted of a Yamaha EMX5016 powered mixer, 2 - Yamaha S215 Dual 15" speakers, and 2 - Community 12" speakers used as stage monitor. The main speakers were connected to power amp outs of the EMX5016 mixer. The stage monitors were connected to a Yamaha EMX212 powered box mixer being used as a power amp. It was a creative setup but, it worked.

For mix inputs, there were just 4 - vocal microphones and 1 - kick drum mic. The rest of the instruments were not miked. There was only one monitor mix sent from the main mixer to the box mixer. The main speakers were run full-range since they cannot be bi-amped. A subwoofer was not used.

The stage size is approximately: 20ft W x 7ft D x 3ft high with a low ceiling. The stage is very hollow inside and some frequencies resonated a little more than others. Used a little bit of EQ on the mixer to adjust it. The kick drum mic used was a Shure Beta 52 and its input level was way too hot until I selected the -26db Pad button for that particular mic input. Solved the problem.

AC outlets were at a premium and I think every one was used on the stage area for the show. Luckily, there were no ground hum issues with the setup. Considering the condition of some of the old light fixtures and electrical wiring, no breakers tripped during the show. I noticed some old fluorescent light fixtures in the ceiling above the stage that all have exposed wiring coming out of them and no light bulbs in them. Instead there were two, clip-on lights on either end of the stage ceiling to light the stage. Found out later that if you want a light show, you need to bring it yourselves. Lighting was basic to say the least.

During my mix I did get some high frequency feedback from the vocal mics due to how near they are to the main speakers on each end of the stage. A little bit of EQ roll-off is all I could do with what was available to work with. Opening band was a trio and I was really pushing vocal sound to get above the louder guitar amp and bass guitar. I kept running out of headroom on the mixer. I did the best I could for the mix.

The main band actually played quieter for their sets than the first band. I had 3 vocal mics up and a kick drum mic up and I have a good mix going during the sets. One song had a guest performer play some harmonica during a song and his sound was good during the set. Generally, I had a decent mix going on. There was only a small but, enthusiastic crowd that came to enjoy the music. It turned out to be a pretty good gig.

There are few things that I would change for my next gig at The Trinity Lounge:
- move the FOH mix to the front of house area - would need to find a mic snake cable for the setup.
- use proper stage monitors on a 2 ch. power amp instead of regular speakers on a powered mixer.
- add a 2 ch. 31 band, graphic EQ for 2 separate monitor mixes.
- remember to bring my iPod to plug into the mixer for house mix
- inquire about in-house stage lighting and bring at least a couple of lighting trees with some lights.
Posted by Ron Behro at 12:54 AM