What a cool idea! Radial Engineering has come up with a stereo DI box that can be mounted inside a standard wall socket. They will be featuring it at the InfoComm 2014 show in Las Vegas this year.

This is a really great idea! I can just see how it could be used for so many kinds of audio/video installations.
It would be a perfect fit for a school gymnasium installation where a basic stereo input is required to feed the audio signal from an MP3 player or a laptop computer or other line level signal source.

I look forward to reading the specs on this item and seeing how easy it is to integrate it into any kind of audio system/installation project. Here is a picture of the device: 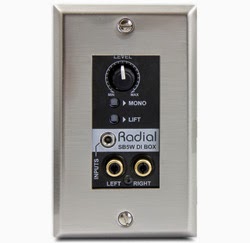 Posted by Ron Behro at 1:13 AM No comments: Links to this post

Too Old To Start A Business?

Is there ever an age when you are too old to start your own business?

Personally, I would like to start my own sound company business but, I wonder if I am too old to get into it.
I turned 45 this year and I still would like to put together a sound business. I would only be able to start a "part-time" business because, I still need my full-time job to live and take care of my family.

Currently, I work as freelance sound technician for local bands and events. Usually, I work with sound systems supplied by the artist or the venue. My main goal is to purchase pieces of sound gear and build my  own sound rig. I am 45 years old now and I feel that I am still not too old to work on creating a business. I would like to speak to other people who have done the same thing to see how it worked for them.

If there is anyone out there who has started a business later in life, I would appreciate any advice you may offer for my idea. Please contact me via email with your suggestions.

Thanks
Posted by Ron Behro at 12:30 AM No comments: Links to this post

After some thought about my lack of sound gear for my recent Artwalk gig, I have come to a conclusion about the kind of setup that would have worked better.

My friend Pete has a Yamaha EMX5014C powered mixer that he uses for his trio band gigs. It has a collection of essential and useful features onboard on all built-in. Since it is self-contained, it is easy to transport to the small gigs where a larger system is just overkill. This mixer would have been totally perfect for the gig that I was part of.

The EMX5014C mixer has 8 mono inputs, 2 stereo inputs, stereo 9 band graphic EQ, SPX effect processor, 2 aux sends, and 500w + 500w of amplifier power available to the mains outputs. There is also selectable amplifier routing allowing custom setup of the power amp channels in the configuration that works for the gig. It can be set to basic left and right mains out, or left/right on one channel with monitor on the other, or both outputs setup for monitor sends.

In addition to the powered outputs, there are also other line level outputs that bypass the internal power amps. Left and right mains outputs, Aux 1 and 2 monitor outputs, and Left and Right Sub outputs. These external connections allow you to connect the mixer to external amp racks or to separate, powered loudspeakers for larger setups.

Now, for the gig I just worked on the street, I could have easily down it with the Yamaha EMX5014C mixer. Everything would have been available onboard and the separate amp rack would not have been required.

The only drawback I can see is if something goes wrong with one part of the powered mixer, you can't just swap out the piece of gear like you would with a component system setup. With the size of gigs I usually work, I would be able to get away with using a powered mixer for most gigs and then adding separate power amps for the larger shows. That is as long as I have enough channels for the show.

Here are a couple of pics of the Yamaha EMX5014C powered mixer: 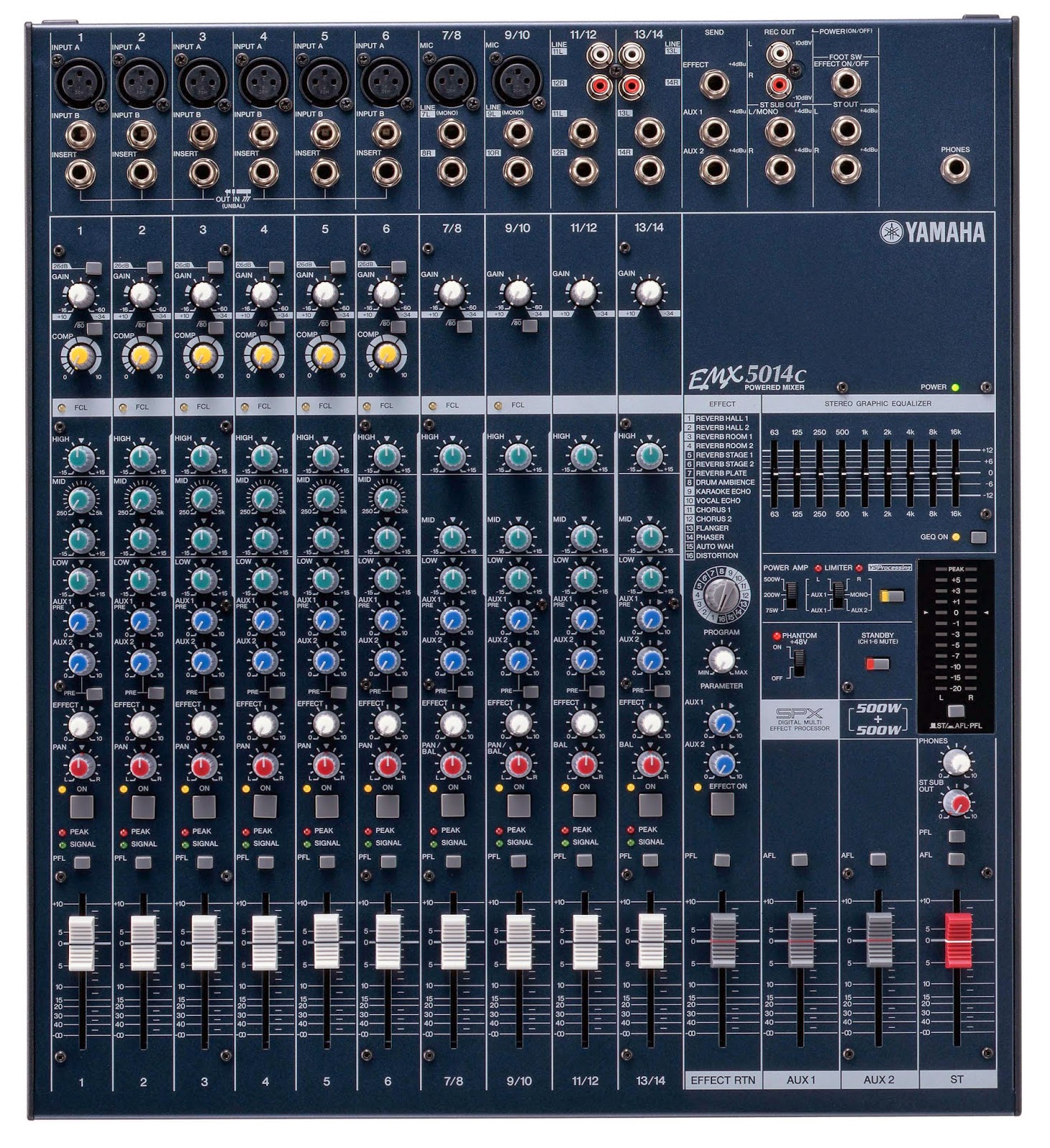 I used the Yamaha EMX5014C as and example of a good powered mixer. Of course, there are other companies making great powered, desktop mixers out there. Allen & Heath, Mackie, Peavey, Yorkville Sound to name a few. There is a cost difference with a powered mixer compared to a passive mixer + power amp setup. There is also the portability issue with all the extra gear using a passive mixer.

Another option now is the advent of powered loudspeakers that can be easily used with any kind of passive mixer eliminating the needs for separate power amps with the system. There are many things to consider when buying a powered mixer over a passive mixer with separate amp. Determine the complete use of your sound system and make an informed decision when out shopping for a sounds system. Happy hunting!


Posted by Ron Behro at 2:11 AM No comments: Links to this post

This past weekend, I mixed sound for 4 acoustic acts and 1 - 3-piece band at Sarnia Artwalk 2014. Under a 11ft x 8ft tent, I had a micro sound system with minimal gear and managed to make it work.

My sound system consisted of a Behringer XENYX 1204 mixer, a Peavey EU112 loudspeaker (just one), a Peavey CS-800 power amp, 2 - Shure SM58 mics on stands and nothing else. For the acoustic guitarists, I plugged them into the line inputs on 2 channels. No DI boxes required. (I mixed from right beside the tent). The sole Peavey speaker was placed at the back corner of the tent and directed the sound 45 degrees towards the performers.

The setup worked well for the acoustic only performers but, when the 3 piece band played, I was getting feedback from the closest vocal mic due to the higher level required to get over top of the band sound. A little frustrating to say the least. The mixer channels only have basic 3 band EQ and I did not have any outboard EQ on the main speaker.

My other issue was the lack of EFX on my Behringer mixer. All the acts asked for reverb and I did not have it. I actually tried to get an EFX processor from a musician friend but, could not because, he was using it for the same weekend.

I know what you are thinking. Why didn't I plan the setup better? Well, I was asked for a basic setup to provide basic sound without disrupting the other vendors at the Artwalk event right out on the street.

If I get to do the same event next year, I will bring a completely different system with all the essential tools I need available. More speakers, a larger mixer with better channel EQ and EFX and a separate outboard EQ for the mains outputs would be a better way to go next year.

I did not take any pictures this year of my setup and I am kind of glad about that. If I get the chance next year to do it again, I will make it much better for the performers. If you are curious, take a look at the picture below of my baby mixer. The Behringer XENYX 1204 USB: 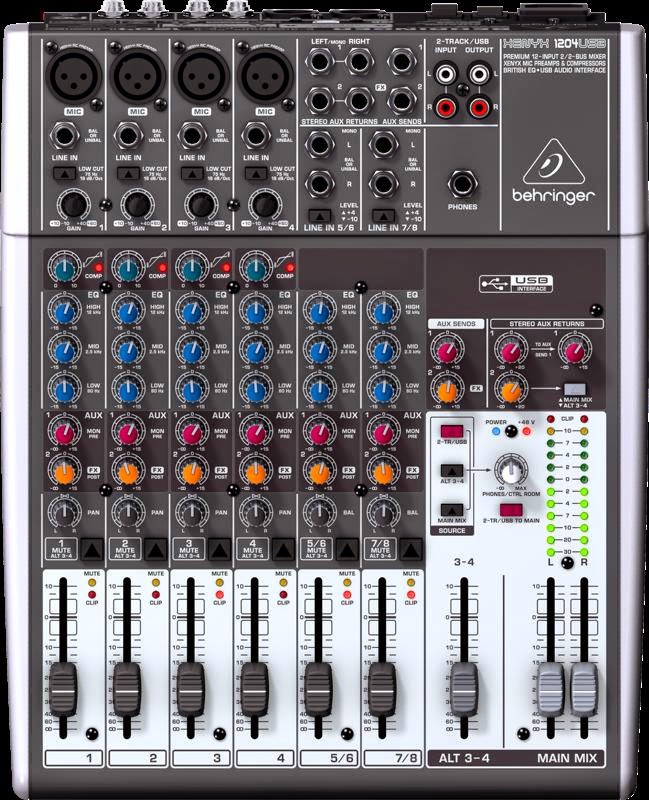 That's all folks!
Cheers!
Ron "Sound Tech Guy"
Posted by Ron Behro at 1:02 AM No comments: Links to this post