Back on New Year's Eve, I was working a sound gig with a local area band. The bassist, owner of his sound gear, decided to rent a Roland M200i digital mixer for the gig.

A few days before I had a chance to play around with it during a band rehearsal. After a little trial and error, I became comfortable navigating the console. Plus the band had a pretty good mix for the rehearsal.

On the gig night, I had a blast mixing on the Roland M200i! I had a great sound mix during the show and no complaints from anyone.

I like the design of the console with everything available at push of a button. Having the iPad setup is also a blessing. All the console functions are available on the iPad app.

I also liked the lightweight, cat 5 snake cable on a cable wheel. Easily setup and torn down at the gig compared to the typical, 16 channel, copper snakes.

Also like the USB recording features on the console. Only thing I had problem with was setting console into recording mode. Quick read in the manual solved problem. Of course, I forgot to start recording at start of the show. At least I got the last few songs at the end of the night. 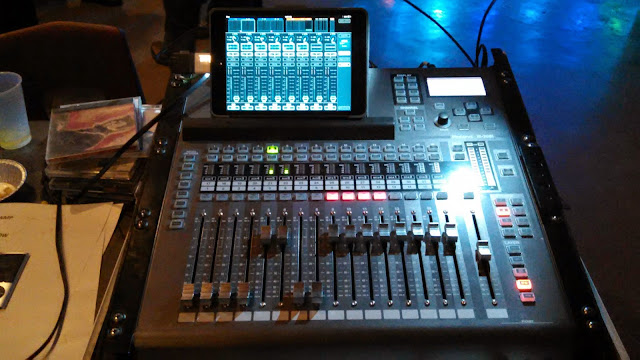 Posted by Ron Behro at 11:25 AM No comments: Links to this post