A Behringer Mixer For Christmas 2013

This year I received a really cool gift from my mom with a suggestion to her from my wife Jenn. My mom bought me a new, compact mixer for Christmas. A very cool gift indeed! The mixer is a Behringer XENYX 1204 USB. It will be perfect for all those gigs I work where only a few inputs are required for the show. Fashion shows, school plays, and record store gigs will be easily accomplished with my new mixer.

The new mixer is my first piece of the sound system puzzle so, now I need to acquire all the other pieces of gear to build a small sound system with. Microphones, power amps, speakers, cables, etc. Just tonight I received a message from a sound tech buddy offering me two free vocal microphones to get me started. What am awesome jesture my friend!

My goal is to put together a compact sound system built around the new mixer that is easy to transport around in my minivan. It also needs to be easy to setup with just the right amount of gear.

The other part of the system will be in the form of a signal processing rack. My new mixer has one-knob compressors on all the mono inputs but, it does not have a built-in EFX processor. Having a small, portable processing rack will be a great addition to my system. The rack will have a dual channel, 31 band, graphic EQ along with an EFX processor and maybe a rackmounted CD player and a power conditioner unit with rack lighting. All of this could easily be racked inside Gator Case or SKB Case for protection.
The mixer itself came supplied with a set of rack ears for mounting in a rack case or rolling rack unit.

I plan on continually checking the Kijiji Classified Ads online for my city and nearby places looking for great deals on quality used gear. With so many sound engineers going to digital mixing consoles, there seems to be a high levels of outboard rack gear that is being sold for real cheap prices. I am sure to find some excellent deals during my search.

Here is a picture of my new mixer for everyone to see. I am looking forward to using my new gear in the new year for upcoming gigs. For awhile I will be renting speakers, subs and power amps until I can save some money to begin buying more gear to complete my system. So, here is picture of my new console. 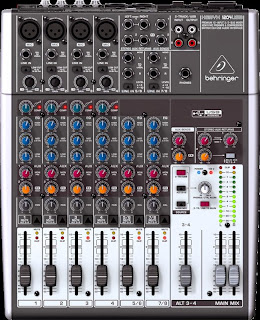 Wishing a Happy New Year to all my sound tech friends and musician friends out there. Cheers!
Posted by Ron Behro at 11:39 PM No comments: Links to this post

Working as a freelance sound tech, there are times when I work a gig where a full rack of sound gear and large mixer are just not necessary. These are the kind of gigs I would make use of a simple powered mixer.

A typical powered mixer is an all-in-one box that houses a mixer, power amplifier, graphic EQ(s), and effects processor. Most powered mixers have 2 pair of amplifier outputs on the back panel for hookup to passive speakers and stage monitors. Since everything is built into the box, all you need to do is connect the speakers, microphones and line level sources to the unit and you are ready to rock.

Most powered mixers have two channels of amplification built-in with a way to route the signals in different ways depending upon your setup. For example, you could setup the outputs of your powered mixer for standard left -right stereo setup with the main speakers.

Or you could setup the outputs for split operation sending one amplifier output to the main speakers and one output to the monitor speakers. This will allow independant control of the main mix and monitor mixes separately. Power ratings for these powered mixers can be anything from 200 watts up to 1200 watts usually at a 4 ohm rating. For many gigs, there is plenty of power to spare onboard.

The input channels on a powered mixer usually consist of a selection of mono microphone inputs along with one of two stereo line level inputs. Each channel strip typically has controls for gain level, channel EQ, a monitor output, EFX send, and channel level all on rotary controls.

One or two graphic EQs are onboard which can be routed to feed the main and monitors outputs for basic EQ control. These EQs are typically the 5 - 10 band variety covering a number or standard frequencies for broad adjustments.

Most powered mixers these days are fitted with one EFX processor with a number standard effects like reverbs, delays, choruses, and such. For the most part, only one effect at a time can be routed to the mix via the effect send control on the input channels.

Another feature that most powered mixers have onboard are connectors to patch the main mix and monitor feeds to an external amplifier or powered loudspeakers. This feature allows you to use the powered mixer like a passive mixer bypassing the amplifier outputs.

Powered mixers are available in two main types. A box mixer or a desktop mixer.

The box mixers are compact enough to setup right on stage or on top of instrument amps. Some of the new box, powered mixers are designed with an angle back allowing them to be set on the stage floor and tilted back just like a stage wedge monitor speaker. This saves space on stage

A desktop, powered mixer is of similar design to a regular passive mixer just with the addition of the power amplifiers. This kind of mixer usually has a little bit more capability to it because, it has more space for more channel inputs and other controls but, does the same job as a box mixer.

Whatever type of powered mixer you choose, you will have an easy to use and setup centre piece to your portable sound system at your next gig.

Below are some pictures of a few typical powered mixers that are available on the sound market: 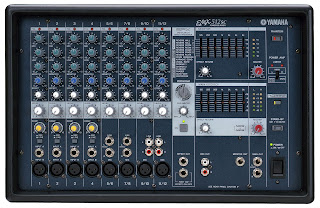 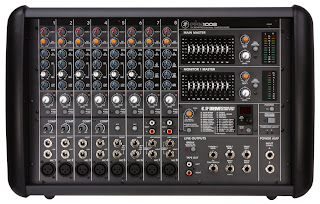 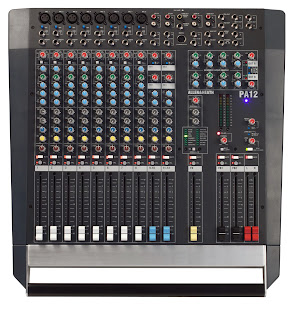 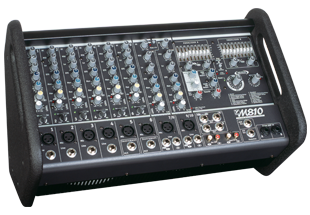 Here is a good example of how one powered mixer can replace a rack case of sound gear: 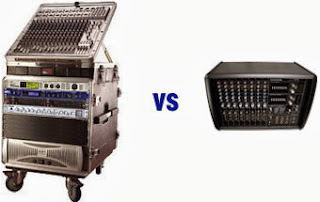 For part 2 of this post, I will discuss a number of ways you can use a powered mixer in live situations.
Coming soon!

UPDATE! Click here for the link to Part 2 of this article: The Many Uses Of Powered Mixers
http://ronbehro.blogspot.ca/2015/02/the-many-uses-of-powered-mixer.html

Posted by Ron Behro at 8:56 PM No comments: Links to this post

Sound System Design For A School Gymnasium with Stage

Pictured below you will see a typical public school gymnasium that has a proscenium stage at one end. Currently, this venue has two speakers built into the proscenium walls but, they have not been in use for many years. There is no amplification hooked up to them. Instead the school uses a rolling rack, sound system with 2 speakers on tripods as a sound system for the space.

The school has expressed a desire to one day have a new sound system installed in the venue. The main audio requirements are for the sound reinforcement needs of the stage during school assemblies, school plays and other kind of events.

Sound requirements include, sound coverage for the entire length of the room, source audio playback from CD, DVD, and computer audio output. Microphone sources include, podium mic, vocal mic for performers onstage, instrument mic for acoustic guitar pickup for musical interludes during school plays. and DI box for signal from a digital piano.

Speaker gear considered for installation would be full range speakers providing front of house sound to audience, subwoofer(s) for low end support for music playback, speakers mounted above stage for sound effects/music playback for actors, and portable stage monitors for musicians and vocalists performing onstage and in front of stage on floor.

Here is a challenge for all of you sound engineers/technicians/installers. By looking at the pictures, I invite you to consider the design of a sound system for the venue using all the requirements listed above. I am very curious to see what other designers would use for gear in the venue.

For anyone who takes the challenge, I invite you to contact me by email to discuss your design. You may contact me at: rgbehro@hotmail.com

Here are the pictures of the venue: 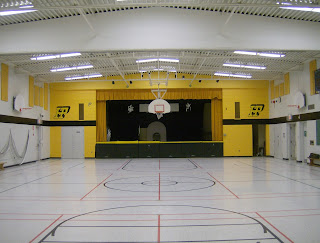 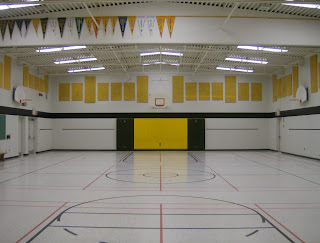 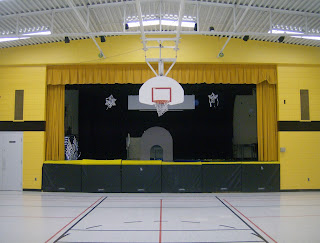 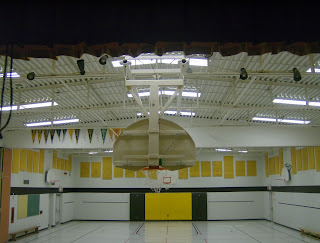 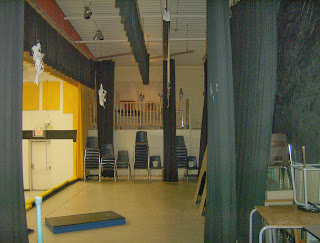 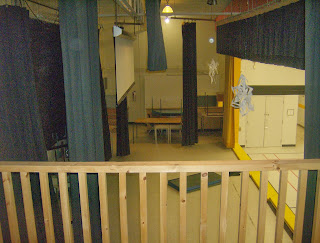 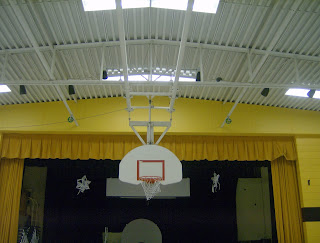 Posted by Ron Behro at 2:04 AM No comments: Links to this post