New Stage Almost Complete at Centennial Park in Sarnia, ON. 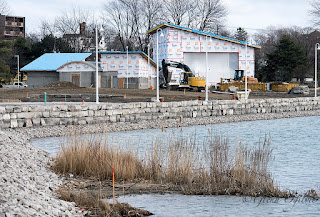 After 4, long years, the remediation work at Centennial Park is getting near the end! Pictured is the new stage, washrooms and concessions currently in construction on the site where the old Dow People Stage once was.

The city says that Canada's 150th Birthday on July 1st, 2017 will be the first event to be featured in the newly updated Centennial Park. The work has taken much longer to complete than originally anticipated and cost much more than first thought.

The park will be reopened in two stages. First at the end of May, the fences will come down around the area of the stage, washrooms and concessions and the playground. Then by the end of June the west side of the park is expected to be opened where the new boat launch will be.

It has been too long since Centennial Park was usable and I am certainly looking forward to going back to it to see many events at the new stage and to just enjoy the park by Sarnia Bay.

Here is picture of what the old Dow People Place used to look like before the park was closed back in 2013 for environmental issues. 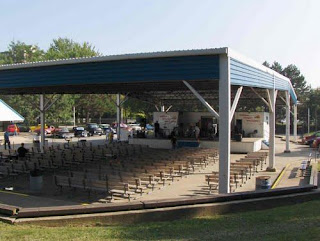 As a sound technician, I am hoping to get the opportunity to mix sound for some future shows at the new stage!

Here is a link to the recent article about this story in the Sarnia Journal paper:
http://thesarniajournal.ca/canadas-150th-first-big-event-in-centennial/